Many elite musicians, like elite athletes, have to play through pain and learn to manage their bodies. And the two retirees from the Milwaukee Symphony this season both cite physical pain as a reason for leaving.

Combined, Norma Zehner and David Taggart have more than 80 years of experience in the MSO’s viola section, but they have taken different paths to concluding that it’s time to stop playing. In the past two decades, Taggart has survived two bouts of non-Hodgkin’s lymphoma and is now near the end of treatment for a third. But a benign tumor at the base of his neck has kept him from playing for the past two and a half years.

“Looking back, the neurological situation was probably in play for five to ten years,” Taggart said, although “after 40 years, you expect a certain level of pain” — he has been coping with performance-related pain since his 20s. But in the fall of 2015, he couldn’t cope with it anymore, and the diagnosis and treatment took months.

All along, “the odds of coming back were pretty low,” Taggart said, “but being the stubborn person I am, I wasn’t ready.” However earlier this year, he realized it was time to accept it. He is grateful that the MSO musicians’ contract gave him the sick leave and disability time to explore every treatment – just as it has for many other musicians who have returned to work after missing time with injuries. “Our contract is a gift to everyone and should not be taken for granted,” he said. “It goes way beyond how much money we get.”

Zehner’s story is not as dramatic, but the pain in her neck is getting worse and her left hand isn’t as nimble as it used to be on the fingerboard. She has gone to a chiropractor for decades and done stretching exercises to stay in shape. But she asked for a leave of absence beginning in January, “and the time just filled in with meaningful things.”

She joined the MSO at age 18 in 1972, while she was still an undergraduate at the since-closed College Conservatory of Music. “They didn’t take me at first,” she said, “because I didn’t play a hard modern piece. I was so naïve, I just played Bach. They said to come back and play something different that showed what I could really do.” Once installed in the MSO’s viola section, Zehner spent the next three years both working full-time and completing her degree.

Taggart played the violin as a teenager, but switched to viola after one year of college. He got into the prestigious Cleveland Institute of Music because they were short of violas that year, even though he was still learning to read alto clef, the standard notation for the instrument. He joined the MSO in 1979 at age 25, and “it’s been a wild ride.”

Both violists readily share memories of the Milwaukee Symphony’s old days, when it played a summer season at Washington Park for enormous crowds. A summer at the zoo was less successful; Zehner remembers a light fixture falling on the timpani, and Taggart shakes his head at the smell of the elephant house when the wind was blowing the wrong way. In the 1990s, the work season began to shrink, gradually falling from 50 weeks a year to 40.

They also remember the days when the orchestra toured regularly, to Europe and Japan and Cuba as well as around the United States. On their trips to New York, “we’d have groupies who would go with us,” Taggart said. “They’d meet us on the sidewalk at our hotel when the bus pulled up.”

Zehner’s retirement activities include volunteering as a driver for Shoreline Interfaith and as a tutor at Bay View Community Center; she’d much rather teach math than viola. Her other passion is birdwatching, both in her back yard in Fox Point and as a volunteer census-taker for the Audubon Society. “It helps to be a musician, because I know the songs by ear,” she said. “Just being out in nature and watching and listening is almost as good as music.”

In Milwaukee County, “it used to be rare to see a bald eagle, but now it’s becoming more common. I saw one flying over the Riverpoint Village Shopping Center not too long ago.”

For years, Taggart’s main non-musical activity has been the Scenic Shore 150, a two-day bike ride in July from Mequon to Sturgeon Bay to benefit the Leukemia Lymphoma Society. He and his wife, Terry Burko, ride a custom-built tandem recumbent bike, and the team he leads, Team Chemo Sabe, has 100 riders and aims to raise $100,000 for blood cancer research this year.

Recently, he has begun playing the mandolin as a musical outlet, but after the Scenic Shore ride, he will be “waiting for clarity on the thing that I’m meant to do next.”

“There are a lot of people I miss from the early days,” Taggart says, “but the quality of the people we are hiring is terrific. The young people in the orchestra are doing some fabulous work.” And the plans for the new concert hall, to be opened in two years, are “the most exciting thing I’ve seen in the nearly 40 years I’ve been here. There’s been some necessary pain and growth that’s coming to fruition in a way I would not have expected 10 or 15 years ago.” 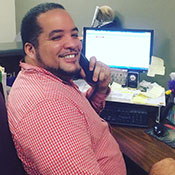 Luther Gray: The Voice of the MSO