Tagged Under: Grand Theater, In the News, Support

Amid the dust, cables, concrete and debris inside the Warner Grand Theater, one spot is ready for opening night.

The mural on the grand staircase, one of eight in the Milwaukee Symphony’s future home, has been cleaned and restored to its 1930 shine – a preview of the work that waits to be done on the other seven murals, as well as metal, plaster, glass and other decorative surfaces.

Over the course of the next 18 months, the interior of the former movie palace will be scrupulously restored, and a new wing will be added at the corner of Second Street and Wisconsin Avenue, to give the symphony a home of its own. The 2020.21 season will be the first in the completed venue.

“Every project is unique, because every historic building is unique,” said Eileen Grogan, historic preservation specialist for Conrad Schmitt Studios in New Berlin, which is responsible for “all of the pretty stuff” in the interior. The Art Deco murals on the staircases and inside the hall have suffered little actual damage – “mostly just wear and tear. Any high-traffic building is going to get a certain amount of nicks and dings where people can touch it.”

Planning to restore a historic building, Grogan said, is a collaboration among the building’s owner, preservation professionals, and the National Park Service, whose approval is necessary to earn tax credits for the project. (Although the Milwaukee Symphony, as a nonprofit organization, does not pay taxes, selling the credits will raise a portion of the budget for the project.) All parties, Grogan said, work to “identify the least costly effective treatment.”

At a very early stage, Conrad Schmitt was involved in putting the plan together, addressing the stenciling, tile, metalwork, railings, mirrors, and other decorative elements. Last October, as soon as the interior of the building was stabilized, with a non-leaking roof and relatively steady temperatures, technicians restored the mural, polished nearby railings, and did other work on the small surrounding area “to get a glimpse of what the whole thing will look like” – and more importantly, to make sure that the studio’s detailed preservation plan will work.

For the Grand’s murals, a simple cleaning, to remove grime and yellowed varnish, will be enough. Conrad Schmitt artisans also applied a new protective coating “so that any changes we put on top of that are reversible.” Because the Warner Grand was designed by Rapp and Rapp of Chicago, it is likely that the murals were painted by the prolific artist Louis Grell.

The 130-year-old local firm works on restoring historic churches, theaters and government buildings all over the country. In addition to the murals at the Warner Grand, it will clean and refurbish decorative painting on the ceiling of the auditorium and around the central mirror in the lobby. It will also recreate the plaster work at the front of the balcony, which was damaged when the theater was split into two auditoriums long after its heyday. The original was lost, but Schmitt technicians can copy it from the building’s original plans.

The overall schedule is “really a big puzzle to put together,” Grogan said. As work proceeds, the art restoration team will “go back and forth with the other trades” such as electricians, plumbers, and heating and ventilation workers.

Preparatory to repainting the lower level of the theater, Grogan scraped the walls for samples of the original color, which will be duplicated, and a fresh coat applied. But if the symphony wanted to change the color, now or in several years’ time, that would not violate the historic preservation guidelines. “Paint is really easy to change,” Grogan said. “It’s not going to destroy the character of the theater. If someone wanted to paint over the murals, that would be a problem.” 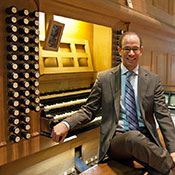 Behind the Scenes, On Stage, Symphony Hall