Matthew Ernst lives on a quiet tree-lined street in Shorewood, and when I stop by on a Friday morning, he is prepared to talk about Tchaikovsky. His trumpet sits on the kitchen counter alongside the first trumpet part to the Symphony No. 4, the music he’ll use at the Milwaukee Symphony Orchestra’s concerts on September 20 and 21.

But first, he offers to show me around the house. It is a fixer-upper, and it has really been fixed up. New kitchen, a finished basement with radiant floor heat, even a soundproofed practice room so he can practice without disturbing his two daughters. Ernst did all the work himself—plumbing, electrical, woodwork. We sit in the kitchen, which has backsplash tile that Ernst grouted just before I arrived, and Ernst spots the family cat peering at us from outside the window. “I better let her in,” he says.

Sitting amid these signs of domestic tranquility seems a sharp contrast to man behind this music. By all accounts, Tchaikovsky led a life plagued by crises and—at times—crippling depression. So eventually, I have to ask: How does he feel about leading MSO’s brass section in the symphony’s thundering opening, which Tchaikovsky himself describes as, “Fate, the decisive force which prevents our hopes of happiness from being realized, which watches jealously to see that our bliss and peace are not complete and unclouded.”

Part of the Job

But first, to matters more musical. How does he play it? And how does he work with the rest of the MSO brass to craft a unified sound to convey that powerful idea?

The short answer: He plays it the way the conductor asks him to play it. “I’ve played this piece a lot,” he explains (in orchestras in New Orleans, Virginia, Cincinnati). “You never get to play it exactly the way you want to play it. That opening is going to be molded. The conductor is going to have an opinion about it, and you’re going to play it they way he or she wants it played. That’s part of the job of being an orchestral musician.”

He’s not the only one playing, of course. Another part of that job is working with other members of the brass section to be sure the sound is blended and balanced. “That’s easy because we all work really well together. If that’s not happening, that’s going to be Ken-David’s job to make sure we have a unified approach, and he will make that happen.”

“Sometimes we have a guest conductor who maybe isn’t that…assertive,” he continues. “Then we have a conversation among the musicians. I’ll talk to Matt Annin and Megumi Kanda (principal horn and principal trombone): ‘How do you want to do this?’ And that’s really easy here because our personalities gel really well.”

“Here’s one way I’ve been asked to play it before,” he says, picking up his trumpet. It’s loud, as any trumpet would sound in a living room. But its stately power is tempered by a slightly mournful quality. It acknowledges the “fate” that likely loomed in Tchaikovsky’s mind, but it seems to emphasize the composer’s reaction to that fate: “There is nothing to be done but to submit to it and lament in vain.”

Then he plays it again—his own take on the phrase. It’s direct, in-your-face, more rage than resignation. “I’m really pressing the sound,” he explains, “trying to get the idea that this is more than just music. This is a man who composed so much from the soul. It’s kind of a cliché to say that, but it’s something I think about.”

This “fanfare” lasts a little longer than a half-minute, but it is central to the symphony. Ernst takes out his music and counts the number of times it returns. First movement: “Three, four, five, six. It’s not in the second or third movement, but in the finale it comes back. He’s kind of beating a dead horse, but he obviously wants this idea to be communicated.”

The Man Behind the Symphony

The “idea” of the symphony, Tchaikovsky insisted, was clear. He said the music spoke for itself. But when his patron—and pen-pal soulmate—Nadezhda von Meck requested it, he wrote a brief “program.” The first movement enacts the tortured battle between bliss-killing fate and the daydreams that might push it out of our minds. The second movement, a songlike Andantino, offers the escape of memory and nostalgia. The Scherzo and the Finale bring us into the life of the world, reveling in folk song and celebration. “Do not say that everything in this world is sad,” he writes, in a passage that many compare to Levin, the idealistic farmer in Tolstoy’s Anna Karenina. “There are simple and strong joys.” But the specter of “fate,” and its turbulent fanfare, asserts itself again, always lurking in the shadows.

The ideas reflect the tumult of the composer’s life in 1877. Looking to quell the rumors of his homosexuality, Tchaikovsky married Antonina Milyukova, a woman he barely knew. A few months later, he suffered a nervous breakdown and attempted suicide by walking into a frozen river. The couple separated, and historians debate whether Tchaikovsky accepted his homosexuality after these events, but he was obviously shaken by the traumatic events. Nonetheless, he recovered and composed two of his greatest works in the following year, this symphony, and the opera Eugene Onegin.

But beyond the tragic “idea,” the Fourth Symphony is bursting with gorgeous melody and musical invention. The interweaving of the three motifs in the first movement is an inventive stretching of the traditional forms (one writer compared it to the invention of Beethoven’s Ninth Symphony). The melodies and textures of the second and third movements are infectious: the haunting oboe solo that opens the second movement, and the third movements charming blending of pizzicato strings, woodwind chorale, and quietly propulsive brass. And the finale is a frenetic celebration of life—tempered by the fate motif—that ultimately seems to triumph.

But the fate motif returns—the prospect of tragedy or doom asserts itself just before the movement closes. And sitting in Matt Ernst’s bright kitchen, I have to ask. Do you feel it when you play that powerful phrase?

“It’s challenging to play, so there’s always the technical aspect,” he explains. “But I try to save something for the performance, try to let go of the technical and commit to emotion.”

“I’ve had tragedy in my life,” he continues. “Not a lot, but it is part of the human experience. I think without the tragedy, there can’t be joy or elation. And as a musician—as a human—we experience these emotions. And that really flows nicely into the instrument. You’re expressing all of the emotions, and the variety of colors is part of the creative process. We get to do a lot of colors.” 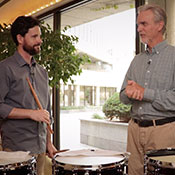