Resilience, Artistry, and a Shared Love of Music: The Stars of Tomorrow Play On

The show must go on for the Stars of Tomorrow, even if a global pandemic forces some changes.

The Milwaukee Symphony’s decades-old commitment to showcasing young talent typically involved two rounds of auditions and concluded with a concert in which teenage musicians sat side by side with symphony members and three finalists performed as soloists with the MSO. But in 2020-21, nothing could be done typically.

“Stars of Tomorrow is our trademark, flagship offering,” said MSO education director Rebecca Whitney, “and we really wanted to offer that opportunity to young musicians, to have something to work toward and celebrate.” The solution was to do the first round of auditions by video. Ultimately, 48 young musicians (about the same number as usual) sent in recordings of themselves performing, which were forwarded to MSO musicians for judging. From those contestants, the judges chose 11 semifinalists, and as COVID-19 rates began to improve in the spring, they were scheduled for an in-person final audition on April 25.

That event “went incredibly smoothly,” Whitney said, with only students, their accompanists, and MSO personnel present, properly masked and distanced. The winner, violinist Ellen Zhou, will perform as a soloist at a Concerts for Schools performance in the fall, and the symphony hopes to schedule a side-by-side concert as well.

Preparing a video audition presented new challenges to the young musicians of Wisconsin. Percussionist Joseph Batterman, who earned runner-up honors for his marimba performance, had to find an open area in his house that would accommodate both his instrument and the accompanying piano, and then he had to experiment with an iPhone for video and a specialized microphone for audio. “It took a couple of tries before I got it the way I wanted it to be,” he said.

“It was equal parts challenging and a great learning experience,” said Zhou, the grand prize winner. Playing the show-stopping first movement of the Tchaikovsky violin concerto, she made too many recordings to count but couldn’t decide on the best one. In the end, she submitted the first version, because “that was the most real, like a real performance.”

“In the process of recording the videos, I learned the piece a lot better, because I got the feeling of what live performance would be like,” said flutist Cynthia Yan, the other runner-up. But for the live second round, “I was super nervous. I was shaking during the whole thing. I was not expecting to win anything, because my legs were shaking the whole time.” But she finished her Stars of Tomorrow career on a high note, after winning an honorable mention designation as a sophomore and not advancing as a junior.

A complication for Batterman’s live audition was transporting his bulky marimba. “It takes a lot of logistical help,” he said, but he wanted to play the instrument he was familiar with, instead of the one on site. “Percussion instruments are large, so you need big trucks and equipment to do it safely.” A percussionist has to learn to play dozens of different instruments, but the marimba is one of his favorites, in part because of the solo opportunities. But one logistical point in his favor was that his accompanist is his mother, Angela Batterman, “so we can practice in the same room without masks.”

“Live performance brings out the best and the worst sometimes,” Zhou said. “If you get too nervous, adrenaline makes your performance so much different. You only have one chance and this is your last chance.” Having won Stars of Tomorrow in her sophomore year at Middleton High School, she plans to enter more contests over the next two years and most likely major in violin performance in college.

Over the past year-plus, “we can all share stories about concerts we were looking forward to” and that were cancelled, but “we found ways to still get those experiences in another fashion,” said Batterman, a senior at Arrowhead High School. Students have also adjusted to performing while masked and distanced; Yan has even learned to play the flute while wearing a specially-designed mask.

“There’s a resilience that comes from this situation,” Batterman said, “and we’ve found ways to share our love of music with other people.” 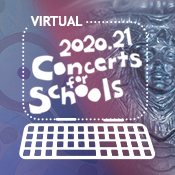 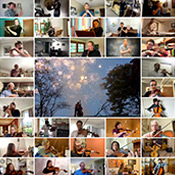