Ben Adler sings when he practices.

The MSO’s assistant principal clarinet has never taken voice lessons or sung in a choir, but when he’s working on new music at home, he’ll put down his instrument and sing a phrase, to understand it instinctively instead of analytically. “You have to find your own voice,” he said. “It takes a while and there are still things I’m learning. But it’s important for me as a person to be able to sing, to be my own musician, not just a Milwaukee Symphony musician.”

Now in his second season with the MSO, and with experience in conservatory orchestras and subbing for the Los Angeles Philharmonic, Adler has been through most of the standard repertoire. But in preparing for a new piece, he starts with getting a copy of the full orchestral score and listening to several recordings to “figure out what my place is in any given moment. Maybe you have a duet that you didn’t know was a duet.”

After his experience in Los Angeles, he sees differences in the MSO’s approach. “Everything in Los Angeles was big and extroverted,” he said. “Milwaukee is more refined. Not everything is extroverted. Everybody listens. The blending is really nice, especially in the woodwinds and brass. The strings are beautiful too – but being a woodwind player, there’s a nice blend in our section that I’ve gotten used to.” But he has also sought out chances to do recitals and chamber music around town, in order to be his own artist.

Performing at this level is “kind of like being an Olympic athlete,” he said. “You have to take care of your body so that everything else falls into line.” As part of his warmup he does breathing exercises before actually playing.

In keeping with his interest in singing, Adler likes watching master classes in voice, and he is a big fan of opera. He feels fortunate that the MSO accompanies the Florentine Opera each season, as well as its own semi-staged Mozart-da Ponte cycle in recent seasons.

Adler grew up in Brooklyn with two professional clarinetists for parents — his mother taught and freelanced, and his father played in Broadway pit orchestras. Because of their familiarity with the music business, they discouraged him from trying to make a career of it – “but it all worked out.” His mother was his first clarinet teacher, and being taught by a non-family member when he went to Northwestern University as an undergraduate was quite an adjustment.

In the MSO, Adler’s other role is to play E-flat clarinet, a smaller, higher instrument that functions as the piccolo of the clarinet family. He liked the sound of the instrument as a child, from hearing works with important E-flat parts such as Shostakovich’s Fifth Symphony and Berlioz’s Symphonie fantastique. Almost every clarinetist chooses either E-flat or bass clarinet as a secondary instrument, and as Adler’s studies advanced, it was an easy decision.

“He’s a very talented young man, always prepared, and brings a lot of personality musically,” said William Helmers, who sits next to Adler in the clarinet section. (The two also golf together, sometimes as a foursome with MSO trumpeters Matthew Ernst and Alan Campbell.)

When principal clarinetist Todd Levy is absent, Adler plays first, usually with Helmers as second. “I think we sound great together,” Helmers said. “I think of the three jobs, assistant principal is the hardest, because it’s hard to immediately get the feel of that voice [when playing principal]. But Ben is terrific. And he’s still quite young, so I imagine he’s going to have a great career.” 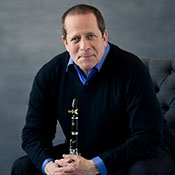