Todd Levy has performed the Mozart Clarinet Concerto many times, but his response to the piece keeps changing. When he plays it at this weekend’s Milwaukee Symphony concerts, he’ll be carrying the weight of departed friends and family with him.

“Our lives change, and it influences how we feel about the music and how we present it to audiences,” said Levy, the MSO’s principal clarinet since 2000. Since the last time he played the entire Mozart concerto, he has performed the slow movement at several memorial services, because “it has a calming, almost religious sense of reflection and thought. It’ll be nice to play it just as art and not associated with death — but it’s going to affect the way I play it. I have to think about all those memorial services.”

He also finds himself thinking about the history of a given work. For these performances, he can’t forget about Anton Stadler, the performer for whom Mozart wrote the piece and other works as well – or that this was Mozart’s last concerto for any instrument, finished two months before his death at age 35.  “You don’t play these things lightly,” Levy said. “You think about your responsibility to the composer, the other people who have played it, performances you remember – a lot of things get tossed into the Mixmaster.”

Levy, a frequent soloist with the MSO, came to Milwaukee from the Metropolitan Opera, where he loved the repertoire but got tired of the grueling schedule. He likes his current balance, playing twice a year for the Florentine Opera when the MSO is in the pit, and performing every summer with the prestigious Santa Fe Opera. “A lot of symphony players don’t get to play the opera repertoire, and for clarinet it’s very rich.”

“It’s important for anyone’s artistic growth to play different repertoire with different people,” said Levy, who also plays at the separately organized Santa Fe Chamber Music Festival in the summer. “It makes us stronger musicians and even better at what we do.”

That kind of diversity also extends to playing solo works. “For people who enjoy doing it, it’s a real growth experience,” he said. “This orchestra is so great, and I love playing with my colleagues and having them back me up that way.” And for audiences that are used to seeing international pianists or violinists soloing with the MSO, “I want to make sure I’m at that same level of performance, at the level of people who do that every week for a living. I try to expect that much from myself.”

“I have a tremendous amount of respect for Todd, and it’s an inspiration to sit next to him every week,” said Catherine Chen, the MSO’s principal bassoon. “He’s a great team player, and he looks out for his colleagues.” Once, she dropped her bassoon just before a performance, knocking a key out of alignment, and Levy jury-rigged a repair with a piece of cardboard that let her get through the concert. “He’s very resourceful,” she said.

Levy also teaches at UW-Milwaukee’s Peck School of the Arts, and estimates that in the last ten years six of his students have won orchestra jobs and six more have gone into military bands. Some have also won blind auditions to serve on the MSO’s substitute list. The university and the symphony have a good relationship, he said, and the presence of a full-time orchestra helps the school attract talented students. UWM students regularly attend symphony concerts, and Levy, along with others in the orchestra who serve on the faculty, are “putting our money where our mouth is every week.”

Oboe or bassoon players, sooner or later, will always end up talking about reeds, but for clarinets, the topic is “super boring,” Levy said. Unlike the double-reed instruments, clarinetists can buy reeds that play very well out of the box. But as for actual instruments, Levy said it’s “hard to quantify” how many he has. Most composers write for clarinets pitched in the key of A or B-flat, but sometimes Levy will use a C clarinet, pitched higher and with a brighter sound, for pieces that require lots of blending with flutes.

Levy lives in Fox Point, and in the few hours when he’s not practicing he likes to take his motorcycle out for a ride. And on the rare occasions when he uses it for commuting to work, the clarinet case is strapped to his back. 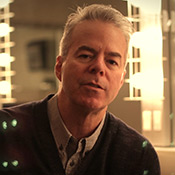 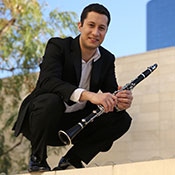 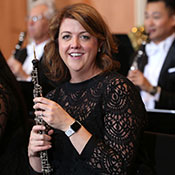