With Beethoven’s Ninth Symphony, the Milwaukee Symphony Chorus will end 2022 in the way that they were supposed to begin 2020.

The celebratory opening of the Bradley Symphony Center was delayed a year because of the pandemic, and even after full-scale performances began last fall, extra cautions were needed to prevent transmission from singing. But the chorus’s activity has ramped up throughout the season. It will play a major role in the May 20-22 performances of the Duruflé Requiem, before closing the season with a blaze of Beethoven in June.

It’s been a tumultuous two-plus years for the entire chorus and for director Cheryl Frazes Hill. During the months of lockdown, she held Zoom sessions with the singers to talk about musical and non-musical matters. “It was a way of continuing community,” she said, “because for a chorus like ours, part of the draw is the relationships that many of them had developed over the years.”

Singing while masked has been a big adjustment. “Everyone was pretty astonished that they could still make music together, despite the constraints of the masks,” Frazes Hill said. “But it’s been a challenge. People get sick, people worry about getting sick, and we have had singers temporarily leave the chorus for personal reasons. Everyone has re-assessed their priorities, and this is a huge commitment.” But in talking with other chorus directors around the country, she has found that other choruses are experiencing similar challenges and Milwaukee’s are far from the worst.

After the successful performances of the Holiday Pops concert and Handel’s Messiah, rehearsals shut down altogether in January because of the Omicron variant surge, requiring the chorus to add extra rehearsals in February and March to make up for it.

In past years, the chorus had to rehearse off-site. Now that the orchestra has its own hall, meeting there every week is “a tremendous advantage,” Frazes Hill said. “If there’s a problem with balance, I don’t have to wait until the rehearsal with the orchestra to find out.” Rehearsing in a hall with excellent acoustics “cuts both ways,” she said. “We hear everything now, the good and the bad.”

When the time comes to rehearse with orchestra, Frazes Hill sits in the auditorium, watching and listening to the conductor (this season, it has usually been Music Director Ken-David Masur). “I have a good relationship with Ken,” she said. “He’s very collaborative.” He will ask for her opinion on such things as balance, and he is very receptive to suggestions.

Before Masur became a conductor, his musical background included singing, and Frazes Hill said, “He understands the voice and how to work with a chorus.” Watching him conduct Messiah in December, she told him, “I think you’re channeling your father,” the late Kurt Masur, who led the orchestras of Leipzig and New York. “That strand of artistry is generational.”

The chorus’s upcoming performances of works by Duruflé and Beethoven will serve as emotional bookends, Frazes Hill said, even if it wasn’t deliberately planned that way. The Duruflé Requiem is “a moment of introspection and reflection,” she said, “and then we’ll turn around a few weeks later to rejoice in the celebratory message of Beethoven’s Symphony No. 9.”

Maurice Duruflé’s setting of the Catholic Requiem Mass text from 1947 is “an absolutely stunning mixture of the Impressionistic approach to setting Gregorian chant,” Frazes Hill said. Combining the Renaissance and the 20th century, “the music happens between the notes,” she said. When the chorus rehearses with Masur, “they have to be flexible,” she said. “I tell them the accelerando could be here or here, but you’ll have to follow the stick.”

And for the Beethoven, a staple of every symphonic chorus’s repertoire, “I’ve told them, I know you’ve done the piece, but your cords may or may not be ready for it. Practice and get back in shape.”

It will be a fitting end to a challenging season. “Post-COVID, I hope there’s an even greater appreciation for the things people are doing to be part of this chorus,” Frazes Hill said, referring to the full rehearsal schedule and the limits of masks. “I thank them every week when they come. I’m so grateful they do the hard work to make the performances happen.”

To learn more about the Milwaukee Symphony Chorus and about auditioning to be a member, visit mso.org. 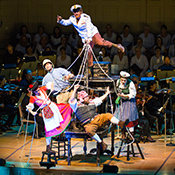 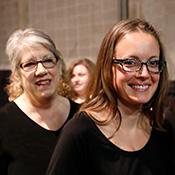 The Right Fit: Searching for the next Director of the MSO Chorus