Subscription concerts in Uihlein Hall weren’t the only things shut down by the coronavirus crisis. The Milwaukee Symphony’s educational programming also took a major hit. But, like so many other institutions, the MSO’s education professionals are regrouping and figuring out a path forward.

As the situation evolved rapidly in March, “we were very fortunate that our concerts for schools had just concluded,” said Rebecca Whitney, the symphony’s director of education. “We were thinking, what do we do now, and what if things change? We plan for the best scenario, knowing that it might change. But it’s easier to have a plan and change it than to have no plan.”

The Stars of Tomorrow concert, for instance, whose origins reach back more than 50 years, will be modified significantly. Traditionally, three musicians from area high schools would perform solos with the symphony in May, and other semi- finalists and honorable mention students would also do a side-by-side concert with MSO musicians on the second half of the program. This year, the concert has been cancelled, along with the MSO’s other public events through June, but Whitney is working with the students and musicians to present a virtual Stars of Tomorrow experience for the semi-finalist and the honorable mention students. The finals will also be conducted virtually, and information about this event will be released soon.

The symphony’s long-standing Arts in Community Education (ACE) program was supposed to have concluded with concerts in late April, but that would have been only the culmination of a year-long relationship between the orchestra, individual musicians, and classroom teachers at 16 area schools. Whitney estimated that students at the schools experienced about 80 percent of their scheduled musician visits before everything closed in March. The symphony will wrap up the year with teachers by asking them to “Show us what you had planned, and what you were able to accomplish.” Whitney and her team are also asking teachers to reflect on what creative strategies they have had to put in place with virtual learning.

The Lullaby Project, in which symphony staff work with women from the community to write songs for their infants, was halted at the draft stage, but “we plan to complete it in some meaningful way,” Whitney said. With the expected lifting of the Safer at Home order, plans are in the works for recording sessions (still respecting safety measures and keeping to groups of less than 10 people), so the nine mothers can still get professional recordings of their lullabies. A live culminating celebration concert may still happen at some point, and options for a virtual event are also being explored as an alternative.

The next educational recording project coming up for young musicians will be a follow up to the symphony’s Bach Double Violin Concerto competition. In a normal year, winning violinists in eighth grade and younger would have performed the classic Bach concerto with the symphony at an ACE concert in April. This year, young performers are invited to download MSO resident conductor Yaniv Dinur’s piano accompaniment, record themselves playing either the first or the second solo part on the concerto, and submit the result to the symphony. In coming weeks, audio producer Jeremy Tusz will put together a montage of the participants.

Now that most live events have found workarounds or substitutes, Whitney said, the next task is to figure out “how to help without overwhelming people.” Every shuttered arts institution has flooded the internet with content in recent weeks, and navigating it can be an intimidating task. “We’ve decided not to keep blasting out material,” Whitney said. But the MSO has compiled a list of resources on its website for music teachers and parents, including games, videos, lectures, interviews, music theory exercises, and more. “Orchestras of every size have great educational resources,” Whitney said, “and we’ve all been sharing with each other.”

Dinur, who is the orchestra’s primary conductor for educational concerts, has also presented two successful Facebook live events for school-aged children. The first was on April 7th and focused on how motion and music intersect, and the second on May 12th focused on basso ostinato, the “stubborn bass “. Dinur will present two more Facebook live events on May 26th and June 9th.

And the education department is also planning for the 2020.21 season in the new Bradley Symphony Center, “when hopefully things will be more normal,” Whitney said. “This whole thing that we’re going through is a case in point for the skills that we try to teach: creativity, collaboration, and going outside your comfort zone. How is this going to carry through in a positive way into your future?” 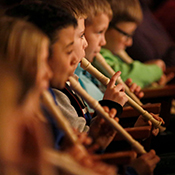