Music has been around for millennia, and opera spans centuries. But S. Katy Tucker sees video art, only a few decades old, as a natural fit with them.

“We can use the tools of technology to help an older art form – not that it needs the help,” said Tucker, who designed the video projections that will accompany the Milwaukee Symphony’s performances of Wagner’s The Flying Dutchman in January.

In her youth, Tucker was a painter who “ran out of things to say” but liked working with others. An internship with the Metropolitan Opera helped introduce her to opera producers and made her into a fan of the art form. So designing videos to heighten the action of an opera became “a nice combination of all my interests.”

Performing an opera with video accompaniment is much different from performing the live soundtrack of a Hollywood movie, which the MSO (and many other orchestras) have done a lot in recent years. A movie score must always be performed at the same exact tempo to line up with the onscreen action. Tucker’s videos, however, follow the tempo that the conductor chooses to take; hundreds of cues marked in the score dictate where the action should start and (if necessary) pause. “Video should never hold the conductor back,” she said.

Her designs for The Flying Dutchman originated in Sydney in 2013, working collaboratively with conductor David Robertson on the images. “We played off each other a lot,” she says.

One of the key images in Tucker’s projections is the Dutchman himself, since his portrait obsesses Senta, the opera’s female lead. That means that before the performances in January, she will need pictures and video of Ryan McKinny, who will sing the title role in Milwaukee.

Other key images illustrate the sea, the storm, the Dutchman’s curse, and his redemption. Because Tucker’s projections were designed for a concert performance, they run almost continuously. A fully staged performance, in which the singers tell the story partly through their body movements, would need less help from video.

The St. Louis Symphony, led by Robertson, performed Dutchman with Tucker’s projections in 2017, when Bret Dorhout saw it. “Katy is very good at enhancing the emotion of a scene, but she’s very conscious about not detracting from the music,” said Dorhout, who is now the Milwaukee Symphony’s vice president of artistic planning and operations. Her designs are fairly abstract, he said, but “it builds and follows the music. They are small things, but they have a pretty profound effect.”

Tucker’s resume shows a preponderance of Wagner productions, and that makes sense to her. “Wagner was writing about projection design before people could do projection design,” she said. “It’s the ultimate experience for Gesamtkunstwerk,” using Wagner’s term for an art work that integrates music, poetry, movement, and visuals — like his operas, he hoped. Video projections, she said, “shouldn’t overpower the music, and with Wagner, I don’t think you can. You read his stage directions, and there was no way with stagecraft then to do them, but with video, you can.”

But she is still careful not to go over the top. “Some people are purists, and I say, ‘Don’t look.’ Sometimes I don’t look at my own designs – I close my eyes and picture it myself. That’s the great thing about live performance.”

Because the form is so new and technology moves so fast, Tucker sometimes feels like she’s struggling to keep up. “Ten years ago, I was faking it till I made it,” she says. Now “I’m more comfortable with the process, but there’s still a tension, which is good.” She thinks that as the novelty of video art wears off, “people will use it only when they need to. It’ll be less work for me, but better work.”

But, she said, “I’m 38, so in video years I’m like an octogenarian. So I make sure I work with young people, who understand these new tools and technologies instinctively.”

People today still find meaning in paintings and music and stories that are hundreds of years old, but video (and movies, for the most part) tends not to age as well. Tucker’s favorite video art works come from the 1980s, when the form was brand new, but “something that was done in 2000 looks antiquated now. Our work is ephemeral, and it freaks me out,” she said. “If the power goes out, I won’t have anything to show for what I did all those years. But the music will still be around.” 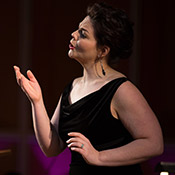