Someone once called Kathleen Collisson a dilettante, and she took it as a compliment.

Collisson has made her living in the Milwaukee Symphony’s cello section since 1977, but along the way she has developed many other interests, including photography, writing (she earned an MFA in creative writing in 1997) and singing (she took her first voice lesson about 12 years ago). “I consider myself an artist in the broad sense, because thatʼs just how I think,” she said. “I love to find the inherent connections between the different things that I do.”

That breadth of experience also extends to the study of early music. Like everything else, instrument technology has progressed over the centuries, but many musicians, and listeners, prefer to experience the music of the Renaissance, Baroque, and sometimes Classical periods on instruments built the way that the composers would recognize. The Milwaukee Symphony, and other major orchestras, do not play on those kinds of instruments, but adjustments of style in the performance of pre-1800 music have crept into the mainstream in recent decades.

For Collisson, it was a gradual transition. When she first became interested in Baroque cello performance, about 15 years ago, “I went to my first workshop knowing next to nothing. I couldn’t hold the cello without an end pin, and Iʼd never played on gut strings or used a Baroque bow.” The Baroque bow is much lighter than the modern bow, requiring a completely different technique, and the strings are indeed made of sheep intestines. But when she walked into her first rehearsal of a gut-string ensemble, “I was completely enthralled with the sound. It was as though the air was shimmering.”

With her new understanding of how Baroque music is played on instruments of the time, she often thinks, “Now I see why the composers wrote it that way.” However, most full-time orchestras do relatively little music from that time period – with the notable exception of Handelʼs Messiah, a holiday tradition which the MSO will perform Dec. 18-22.

Thatʼs why Collisson always asks to play in the small Messiah orchestra, on her modern cello, “but as stylistically correct as possible.” Her first performance of the piece was half a century ago, as a high-school student hired for a Chicago-area church performance near her home town of Addison, Illinois. “Itʼs a piece I never tire of,” she said. “Iʼve played it hundreds of times, but I truly love playing and hearing Handel.”

She had a lot more to unlearn when she first tried the bass viola da gamba two years ago. It’s a low-pitched string instrument from the Renaissance and early Baroque, held between the legs and played with a bow, but “itʼs not really a close relative of the cello,” Collisson said. “Itʼs a member of the lute family. It has frets and is tuned in fourths with a third in the middle, like a guitar.” But her study of early instruments has given her new insights into modern cello playing. “So often we learn and appreciate new things about our home once we step away from it for a bit.”

No matter what creative endeavor she is taking on, she enjoys that it can be addressed in technical terms, as a series of problems to be solved and a search for the right approaches to solve them. Her sense of the connections between artistic fields goes back to her teenage years, when she was “completely captivated” by a student performance of Dylan Thomasʼs radio play Under Milk Wood at a summer arts camp. “I was studying the Bach Preludes and Fugues on the piano at the time,” she said, “and this was my first inkling of the inherent structural similarities between language and music.” But her formal pursuit of writing had to wait a few decades, until her two children were older and she could attend a low-residency MFA writing program.

Playing in the MSO since 1977 makes her one of the orchestra’s most senior members, one who can remember when “we recorded, we went to Carnegie Hall regularly, we toured in the U.S. and abroad. And we also toured extensively throughout Wisconsin.” She views the opening of the MSOʼs new concert hall with excited anticipation, and one further step along the MSOʼs long path of excellence. As her long career approaches its eventual culmination, she looks forward to exploring more artistic connections. “I would love to write a short story about early music, or compose a piece based upon an original poem. There are always too many ideas and not enough time!” 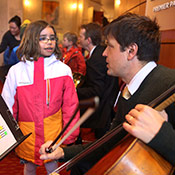 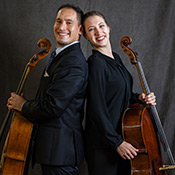 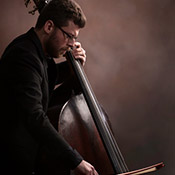