Jon McCullough-Benner didn’t pick up an acoustic bass until he was 14. Only 11 years later, he’s the Milwaukee Symphony’s new principal bass, making interpretive decisions for a section that includes several musicians old enough to be his parents.

“But I don’t need to do much,” he says when the subject comes up. “I try to show by example how something needs to be done. And I’ve learned when to let go and let the section do something.” Leading a string section, with its larger group of musicians, requires management and social skills, but for musical direction, he tries not to verbalize much. “I might say something like, ‘Listen to the violin pickup at measure such-and-such’” he says. “But every player in the section has strengths that can benefit the whole. I have to respect that kind of experience, because they’ve been here so long.”

His ascent to the top has been rapid, to say the least. “I worked hard,” he says with a shrug. “Once I realized bass was what I wanted to do, that’s when I started practicing three hours a day, on top of all my high school coursework.” McCullough-Benner started with the MSO in January after nearly two years as principal bass of the Oregon Symphony — a job that he won during his second month in graduate school.

Growing up in Dayton, Ohio, he played guitar, drums, and electric bass in a rock band, but started the acoustic bass in order to play in his high school orchestra. He found himself attracted to “the fundamental role that the bass has in any group. It gives the group a sense of being grounded; it establishes the groove.”

Do Mozart and Beethoven have a groove? “Yes. Always,” he says immediately. “Every composer or piece has a different feel, and every bass line gives a lot of insight.” As for groove-y genres like jazz and rock, McCullough-Benner has an electric bass at home (he thinks most orchestral players do) and he’d like to have more chances to use it.

McCullough-Benner credits his first teacher and orchestra director, Mark Barnard, with “sparking the music that was always there in me. But bass happened to be what I was already playing.” Since then, he has jumped around to many different teachers, and not entirely by accident. “Everyone has their own approach to problem-solving,” he says. But from his second key teacher, Owen Lee of the Cincinnati Symphony, “I learned a lot about professionalism and how to practice.” Now he carries on the tradition by teaching once a week at Roosevelt University in Chicago, and he hopes to establish a private studio in Milwaukee.

The bass world is divided between proponents of French bow (holding the bow overhand, like a violin) and German bow (holding the bow underhand). McCullough-Benner plays French bow now, but has tried both and sees advantages to both. The French technique, he says, offers more control and refinement and is easier to play fast; the German technique is better for solos or more powerful playing, particularly in Russian repertoire.

In the coming season, McCullough-Benner is looking forward to playing Mozart’s 39th Symphony in September with Edo de Waart (“it’s so joyful, and kind of Baroque in a way,”) and to the MSO’s annual performances of Handel’s Messiah at several area churches in December. “It’s played a lot for a reason,” he says.

After living in Milwaukee’s walkable East Side neighborhood for seven months, McCullough-Benner says, “It’s very much a place I can call home. Maybe because I grew up in the Midwest. Don’t get me wrong, I liked Portland – but maybe I wasn’t hipster enough.” 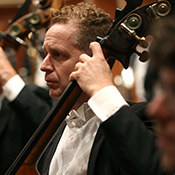 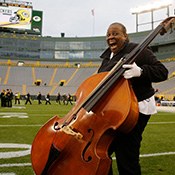