The streets around the Marcus Center for the Performing Arts are lined with yellow school buses. Rows of children file into every door of the building. It’s a Concerts for Schools program, one of 15 that the Milwaukee Symphony performs every season for more than 30,000 students from approximately 200 schools from as far north as Green Bay and as far south as Illinois.

But an audience of second-graders is very different from a subscription audience, and it’s associate conductor Yaniv Dinur’s job to keep the kids engaged.

On this recent morning, the opening number is Offenbach’s lively “Can-Can,” and many kids are bouncing to the rhythm and conducting in their seats. The theme this week is “Musical Opposites,” and after the music, Dinur talks briefly about how big instruments play low notes and little instruments play high notes.

“Now, was that a fast dance or a slow dance?” Dinur asks.

“Do you think a turtle could dance it?”

The rafters ring with cries of “Noooo!!”

And that leads into “Tortoises” from Saint-Saëns’ Carnival of the Animals – the same tune as Offenbach’s “Can-Can,” drastically slowed down.

The next piece is a selection from Prokofiev’s Romeo and Juliet, and Dinur turns to the orchestra and says, “Can we play eight bars before rehearsal number 7?” Conductor and orchestra did not go over this during the only rehearsal for this concert – but the MSO has gotten used to rolling with Dinur on the spur of the moment.

Another musical opposite, Dinur tells the kids, is melody vs. accompaniment. Which is more important? By show of hands, most of his audience says melody.

“Cellos, trombones, anyone who plays accompaniment, thank you so much, you can go home,” Dinur announces. “We’ll play this piece with only the melody.”

But of course, that sounds quite incomplete. “Guys, thank you for staying,” Dinur says, deadpan. “We’ll play it only with the accompaniment. Violins, nice to see you, goodbye.”

And after listening to the accompaniment alone? “I know what the problem is,” Dinur says. “They’re both important. Just because they’re opposites doesn’t mean one is more important than the other. In fact, it’s quite the opposite.”

To put together a program for children, Dinur said later, “first of all, it has to be great music, and also there has to be something to show the kids. The script comes last.” Dinur works with Rebecca Whitney, the MSO’s director of education, to come up with themes and music to illustrate them. He tailors his approach to the age of the audience – asking them to shout out answers, for instance, works for second-graders but not for high school students.

“But no matter what the age,” Dinur said, “I’m thinking about what would I enjoy if I were in the audience. I try to treat them like adults and talk about the music.”

Samantha Cruz, a music teacher at Cumberland Elementary School in Whitefish Bay, takes her first- and second-graders to an MSO concert every year, after first teaching about the music, the families of instruments and the concert hall. “If I know the music ahead of time, it’s more fun for me to hear it,” she said, and the same is true of children.

“I liked the way they played the parts separately, and mixed it up,” said Hazel M., a second-grader at Parkway Elementary School in Glendale. Like Cruz’s students, she and her classmates also learned in advance about the music and audience etiquette.

“The most important thing is the experience,” Dinur said. Even if the audience doesn’t remember the specific musical lessons in future months or years, “we hope they’ll remember the experience they had, and that an orchestra is fun and the music was great.”

“More than anything, it’s the exposure,” Cruz said. “We want them to feel comfortable going to the symphony.” And what did her students think of the experience? “They loved the conductor. They thought he was really funny.” 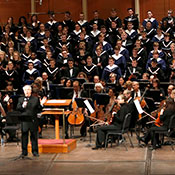 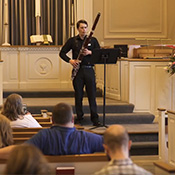 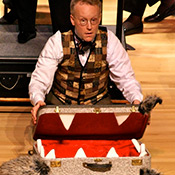