Gearing up for a busy first full season in the Bradley Symphony Center, the Milwaukee Symphony will need even more support from its large roster of volunteers.

Supporters of the symphony’s mission fill many roles, but the ushers who seat the audience are one visible face of the interaction.

“I love working with volunteers and welcoming patrons to the theater,” said Patrick Schley, the MSO’s house manager, who has a decade of experience at various arts venues in the city. “We oversee everything from getting you from the front door of the building to your seats, making sure everyone has an enjoyable and safe time.”

At Uihlein Hall, ushers were the Marcus Center’s responsibility, but now it’s an in-house program. Since March, Schley has trained 147 volunteer ushers via Zoom, but “we will definitely need more before fall,” and the MSO is recruiting volunteers for that role and others.

Performances this spring for reduced audiences have been staffed by crews of 15 to 20 ushers. “It’s a great opportunity for all our volunteers to get used to the space before we have a full house,” Schley said. “We can learn where we need to place people and where the pinch points are.” For planned full-capacity crowds in the fall, 25 to 30 volunteers will be needed at every performance, “scanning tickets at three locations, coat check at two locations, directing people around the hall, and making sure they know where they’re going.”

Usher teams for the symphony’s 20 children’s concerts each year, however, have always been run by MSO volunteers. And for the past year-plus, the leaders of those teams have been “keeping in touch with each other, making sure everyone is okay, and seeing who is coming back,” said Sherry Johnston, the co-chair of the program. “I love music so much, it’s a huge part of my life, and I see the appreciation other people get from music too. It gives me a thrill to see kids’ eyes light up.”

The three chairs have toured the Bradley Symphony Center and are discussing  “how to get school groups in and out of the new hall” when concerts begin in the fall, Johnston said. Next to see the facility in person will be the team captains, followed by the ushers, divided into teams of 18 to 20.

Johnston, a retired Milwaukee Public Schools teacher, needs about 20 more people for school concert ushering, after “some deaths, some aging out, some moving, and some people saying this is the time to say I’m done.”

The highest-profile role for volunteers is probably the Milwaukee Symphony Chorus, which will need to pick up where it left off in March of 2020. The schedule for the new season deliberately does not include any choral music until December to allow for rehearsal time, since earlier “it wasn’t clear how safe it would be to gather over 100 people to sing in one room,” said chorus manager Christina Williams. Thus, rehearsals will begin in September.

Turnover always happens from one year to the next, but Williams said there have been surprisingly few departures. “Being vaccinated makes a lot of people more comfortable,” she said, “and they all want to sing in that new hall.” When auditions are held this summer, “we will accept as many qualified singers as we get.” More information about auditions can be found here.

Singing in permanent seats from three sides of the stage will sound different, “but it will be great to have a solid floor,” Williams said. “On the risers (in Uihlein Hall), you could feel it when someone shifted to the other leg.” Rehearsals, which used to be at Mount Mary University, will now be held on the main stage of the Bradley Symphony Center, moving to the permanent chorus seats when the performance draws near.

“I get something extraordinary out of being in the chorus,” said Williams, who joined in 1996 as a new music theater graduate. “It’s a remarkable musical and social experience. We’re like a family, and it’s hard to achieve that at such a high level.”

Aside from the satisfaction of a job worth doing, ushers get to hear the concert for free – which is one reason why the symphony is reaching out to the arts departments at Marquette and UW-Milwaukee to recruit students. Schley would also love to have more diversity among the volunteers welcoming people to the building, but “it’s our goal to remove the barriers of entry,” he said. He stresses that all potential volunteers are welcome regardless of experience level. “All you need is a passion for being welcoming and hospitable. A passion for music is great, but even if you’ve never heard a symphony concert before but are interested, we want to hear from you.” 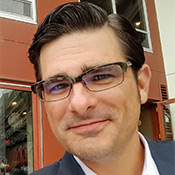 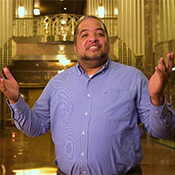 At Last, We Can Say It: Welcome.