Water & Music collide at the MSO on October 27

Audience members who hear the Milwaukee Symphony perform Water Music at Discovery World on Friday, October 27, will also have a chance to learn something.

Instead of a conventional fundraising event, “we’re having ‘edutainment’ instead,” said Maggey Oplinger, the symphony’s director of community partnerships. Patrons will get guided tours of the water portion of the museum, experimenting with water-related musical instruments and learning about the Great Lakes, the fish in the aquarium, and Milwaukee’s water infrastructure – “the stuff we never get to hear when we’re there with our kids,” Oplinger said.

After the drinks, exhibits and talks, the symphony will perform Handel’s Water Music. The piece’s well-known origin story is that Great Britain’s King George I hired Handel in 1717 to assist in a display of royal pomp and power, which included barges full of musicians on the Thames River playing Handel’s original music.

“It would be cool to do it when it’s warmer outside, on boats, with as many musicians as possible,” said MSO Associate Conductor Yaniv Dinur, who will lead the performance. “But we’ll be close to the water, in a more intimate atmosphere where people can listen closely to the music.”

There are three separate Water Music suites, but Dinur will be choosing movements from each to create a compilation of about half an hour of music. “This is the 300th anniversary, so it’s the perfect occasion to do it,” he said.

Playing music from the Baroque period always involves making decisions about historic instruments and performance practice. The MSO plays on modern instruments, but Dinur remembers conducting an original-instrument performance in Vienna a few years ago. He loved the sound, “but I learned that we don’t really know” what the music sounded like in Handel’s time, he said. “Even the people who tell you, ‘This is how it should be’ don’t know.”

Patrons will also hear from MSO Executive Director Mark Niehaus and from Julia Taylor, president of the Greater Milwaukee Committee, speaking about “Milwaukee, and water, and music, and how the symphony has fit into the fabric of Milwaukee,” Oplinger said.

“We’re part of this city, and water is one of its greatest resources,” Oplinger said. “The lake is a huge draw. When friends come in from out of town, they get off the plane and their jaws hit the ground. There’s no understanding of how big these lakes are.”

The evening will also include blind tastings of three brands of bottled water and Milwaukee tap water. “It shows how great Wisconsin tap water really is,” said Paul Fladten, public relations manager for Discovery World. Before taking the test himself, he said, he was a fan of bottled water, but now he realizes “I wasted a lot of money and a lot of plastic water bottles.”

The Discovery World exhibits demonstrate “how we’re keeping Milwaukee as a hub for freshwater in the future,” Fladten said. “We’re sitting on liquid gold.” The museum works to promote STEM education (science, technology, engineering, math), but Fladten agrees with the effort to add arts to that list to make STEAM, citing the museum’s Les Paul guitar exhibit and the hands-on design studio. “We want everyone to know everything,” he said.

“We’ve had so much fun planning this,” Oplinger said, “and we’re already talking to Discovery World about how we can collaborate in the future.”

“We’re always looking for things to connect music to the venue and the environment,” Dinur said. “This will be a new experience of listening.” 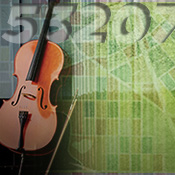 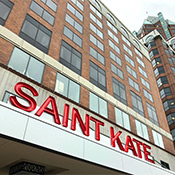