The rebranding of the hotel across the street from the Marcus Center means that their partnership with the Milwaukee Symphony could go in a lot of new directions.

The former Intercontinental has long been the MSO’s lodging of choice for its visiting guest artists. But since the Marcus Corp. relaunched the property in July as Saint Kate, an arts-themed hotel, new possibilities are afoot, beginning with the opening weekend celebration of Ken-David Masur’s installation as music director.

The gala on Saturday night represents “a whole new chapter for the MSO and Ken-David, so we wanted to do something different,” said Ana Minter, the MSO’s partnerships and events manager. “We were looking for a way to celebrate his German heritage, aside from lederhosen and dirndls,” so the symphony asked the Saint Kate culinary staff to come up with a German-themed dinner that hotel patrons would not see on the restaurant menus.

Patrons who buy tickets to the gala will have drinks and dinner beforehand, cross the street for the opening concert of music by Wagner, Schumann, Detlev Glanert and Richard Strauss, then reconvene at the hotel for a champagne toast with Masur and members of the MSO.

Although Saint Kate’s role as an arts hotel is new, Minter pointed out that the Marcus Corp. has long, deep ties to the MSO and the city; it gave its name to the performing arts center that has housed the symphony for nearly 50 years, and it donated the Warner Grand Theater property to the MSO for renovation into its next home. “Both the donation and the fact that they maintained it for years when it was empty, that’s a gift they gave to Milwaukee,” Minter said.

Even after the symphony moves in a year, Saint Kate will continue to be its hotel, as guest soloists and conductors walk three blocks to the concert hall instead of one.

Although the celebration of Masur’s first concerts will be a splashy event in its own right, it will also be a dress rehearsal for even bigger events in 12 months to open the new hall. “We want people to save a spot on their calendars for the fall of 2020,” Minter said. “We definitely will have a big celebration for opening the Grand, and all the partners who have worked on that project.”

“It’s not just our home, but it’s for the whole community,” said Tina Itson, the symphony’s director of institutional giving. “It’ll be an opportunity to meet the building and meet us in the building.”

Aside from hosting the MSO’s guests, Saint Kate is presenting its own array of arts programming. Programming director John Price is building a contact list of musicians in many different genres, including musicians from the MSO. Masur attended the grand opening, and plans are afoot for more collaborations.

The hotel’s public space also houses a gallery that serves as a second location for the Museum of Wisconsin Art, based in West Bend, and a 95-seat black box theater for dance, theater and revue performances.

All guest rooms are furnished with a ukulele, a record player with some LPs, and colored pencils and paper for guests who are feeling creative. Maybe that will be just the thing for the next violinist or pianist who solos with the Milwaukee Symphony. 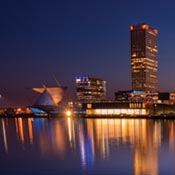 Water & Music collide at the MSO on October 27