Tagged Under: 2017.18 Season, Symphony in the Neighborhood

The Milwaukee Symphony already plays at a wide variety of venues around the area. But in April, musicians will spread out across the bars, grocery stores, and front porches of Bay View.

The MSO neighborhood residency program, which got its first trial two years ago in Riverwest-Harambee, aims to blanket one district of the city with 25 to 30 concerts of all descriptions. Bay View, with its recent influx of young professionals that has not erased the area’s previous character, will welcome the musicians of the orchestra April 6-15.

“There’s a perception that the symphony is a downtown, East Side kind of group,” said Christopher Miller, past president of the Bay View Neighborhood Association. “If we can bridge that, it’s good for everyone.”

One bridge that has already been built is the symphony’s annual appearance at Chill on the Hill, the popular summer concert series in Humboldt Park. Although the MSO is the only classical group on the lineup, it attracted the biggest crowds of the season last year. “Five thousand people packing Humboldt Park – that’s a lot,” Miller said.

“It can be intimidating for people to come to the hall,” said Maggey Oplinger, the MSO’s director of community partnerships. “It’s sometimes perceived as a very formal, literally black tie affair.” But the secret to making a residency work, she said, is to listen to local organizers’ ideas. “There’s no wrong way to do it, as long as we’re respectful of where we’re going and who’s there.”

When musicians performed on front porches in Riverwest, “people were excited, they were shocked, there were tears, we got hugs,” Oplinger said. “Those are relationships we may not have been able to cultivate in the same way in a formal setting.”

“Bay View has been cool for longer than people realize,” said Patty Thompson, current president of the neighborhood association and a lifelong resident of the area. “It’s been a community of artists, of workers, and we’ve had our share of well-off people, especially along the lakefront. It’s always been a little bit gritty, but it’s a community of artists and teachers, as well as blue-collar.”

And that community also now includes a good sprinkling of MSO musicians. “We’re really enmeshed in the community,” said assistant principal bassoon Rudi Heinrich, who moved to Bay View five years ago as a renter and bought a house last year with his wife, Meaghan. “We know a lot of our neighbors; our kids go to school here. We trade child care, we run into people at the parks, we go on spontaneous bike rides.”

For his small-scale concert, Heinrich plans to duplicate the program he did in Riverwest with violinist Paul Hauer, playing a mixture of classical and popular music and offering MSO ticket vouchers as a prize to audience members who win a game of “name that tune.”

Thompson studied oboe and has played side-by-side concerts with the MSO, and compared to past decades, she says that now the orchestra is “a more visible part of the community than it’s ever been before. They’re not only excellent professional musicians, but they’re also my neighbors.”

The week will include a full-scale, free concert at Bay View High School on April 10, and the Avalon Theater is also hosting an event, but other concerts will try to emulate the vibe of “local bands playing in local bars,” Miller said. The orchestra will also perform at St. Lucas and St. Augustine schools, which will invite students from other schools as well.

Miller also coordinates the MSO Mondays program, which presents chamber groups of musicians playing at Colectivo cafes throughout the metropolitan area. But the residency, he said, is a chance to reach beyond the coffeehouse demographic. It may, in fact, try to emulate the atmosphere of Chill on the Hill. Oplinger remembered that last summer, conductor Yaniv Dinur made a joke about “helping the poor hipsters of Bay View,” which got a good laugh – to Oplinger’s relief.

Repertoire for the dozens of mini-concerts will cover “everything the symphony has to offer,” Oplinger said. “It’ll be classical, popular, music you know from cartoons, music you’ve never heard before but it’s great.” And for the “Secret Symphony” concert at Milwaukee Blacksmith on April 14, the common theme will be machine-inspired music.

Oplinger is encouraging neighborhood associations to approach her to begin planning the next residency event. Up until now, it has remained within the city limits, but she said, “It could go to a suburb. I suspect it will at some point.”

Education, From the Podium 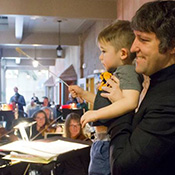