Tagged Under: 2020.21 Season, Conversations with Composers

When Eleanor Alberga is in the thick of it, composing music is almost a 24-hour enterprise.

“When I start going more deeply into a piece, then the composition process never stops,” she explained over the phone from her home in rural England, “I’m thinking about it as soon as I open my eyes in the morning. Most of the time, I have ideas while I’m lying in bed waiting to get up. It’s only if I set myself on some tedious task or give myself a distraction can I cut that off. It seems to just go on constantly.”

There are times, in fact, when ideas come to her in dreams, something to remember when you listen to Shining Gate of Morpheus, which is part of the Milwaukee Symphony Orchestra’s “Dream Gates” concert, available at MSO Live on February 27.

The Morpheus in the title refers to the Greek god of sleep and dreams.

“Dreams have been important to me through most of my life,” she explained. “And I’ve always been interested in Greek mythology, so I thought about a piece inspired by Morpheus, the god of dreams.”

In 2007, Alberga finished another nocturnal chamber piece, Succubus Moon, for string quartet and oboe. After finishing work on an opera, Letters of a Love Betrayed, in 2009, she took a short break from composing. When she came back to it, she wanted to write for a string quartet again, but opted for a French horn as the fifth instrument. “It has that warmth of sound and that all enveloping quality, which I thought would suit the piece.” (Principal Hornist Matthew Annin will play the part at this concert.)

Apropos of music inspired by dreams, Alberga says she approached Morpheus a little differently. “I came back to composition thinking I’m not going to be so strict with myself about working out material to every last detail before I start,” she explained. “The ideas came to me in a more free-flowing way.”

She describes Morpheus as a series of “dream tableaux.” And yes, she says, they are based on her own dreams. But she adds, “they are very personal, so I won’t give away exactly what everything signifies.”

She will identify the specific inspiration for the middle section of the piece. That old trickster, Puck, the figure of English folklore most famous for messing with the lovesick dreamers in Shakespeare’s A Midsummer Night’s Dream. “He wasn’t in my dreams,” she explains. “He just comes in and says, ‘Whatever it is that’s going on here, I’m going to come in and make some trouble.’”

Appropriate to that “trouble,” the middle section stands apart. “It’s more atonal, and quite brash and dissonant in a quirky way.”

Alberga’s use of vivid textures, dissonance and charged, irregular rhythms put her work firmly in the tradition of contemporary European music. But her life story suggests a musical mind that has been shaped by a diversity of musical styles and traditions.

Growing up in Jamaica, she lived on the grounds of a high school run by her mother, and was fascinated by the piano lessons she heard around her. She started her own lessons at age five. She later studied voice and piano at the Jamaica School of Music and joined a Jamaican folk singing group. She developed a passion for Bartók, but was also exposed to the richness of Jamaican pop music.

This musical childhood led to a musical life in London. She won a scholarship to the Royal Academy of Music in London to study piano. She discovered traditional African music, performing in an amateur dance group. She played piano for a contemporary dance company, which allowed her to improvise music for dance exercises. Eventually, she was asked to compose music for the company, and became its music director. Those early compositions lead to a celebrated career as a composer and pianist.

With such varied musical experiences, it’s not surprising that Alberga wants to celebrate the universal appeal of music. “To communicate on a human level with people, that was such a strong part of my reception of music as a child,” she recalls. “I try to touch on that in any way, either as a musician or a composer.”

“It’s a language with so many different strands, you can touch on every single human emotion. And every single individual can react differently. There’s a whole universe of exploration and communication.”

Supporting the Arts During a Pandemic 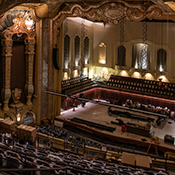